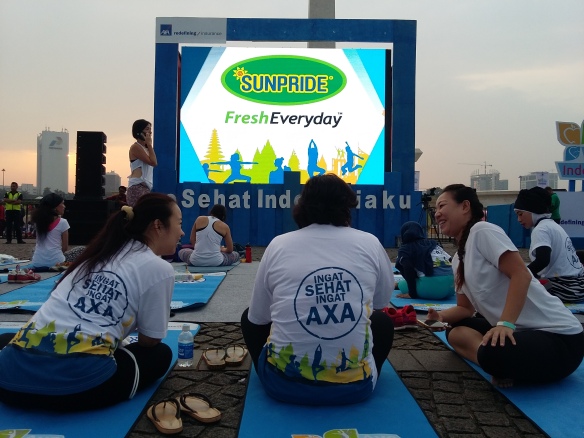 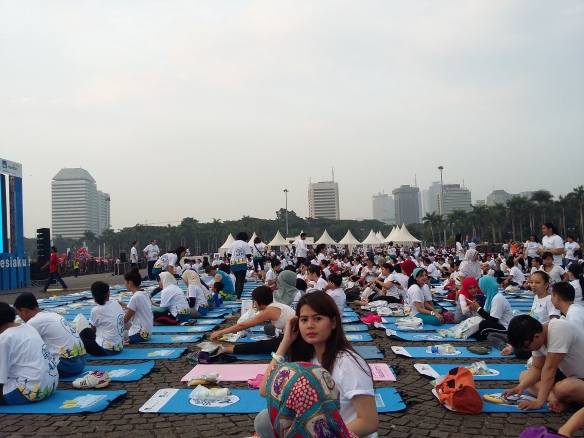 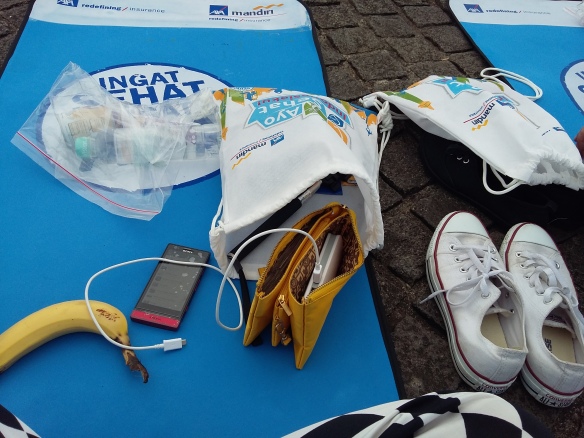 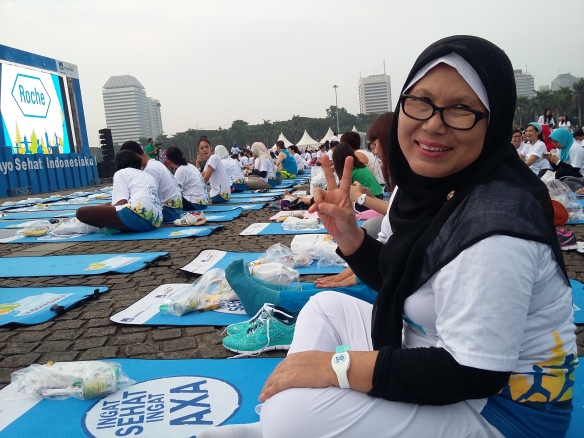 And the Yoga begins!

We did many yoga poses, but only few that I remember the name of, such as down dog, tree, side plank, cobra, tortoise and apa lagi ya.

For the yoga poses, here are some of, I think.

For you who don’t know about Market Museum. It is Thematic market for young entrepreneurs!

And here I am, in their event called Surprise Kitchen Vol.2 at Lippo Mall Kemang. I have never been to Kemang Village  also to Market & Museum. So, when my dear cousin * Dta * told me about it and asked me to go with her * in the end, we went with our family. My uncle, aunty, and my mom * I was like, whoaaaa, so excited.

My first impression of this event was like. Oh My God. I’m so dead. RIP DIET * although I’m not really on diet * Can you imagine, food and drinks everywhere. Not just ordinary one. A cute, unique, luscious, yummy food all over the place. Deep down in my heart, I kept praying, “Dear God, phewlisss… don’t let my tummy be greedy today.” But hey, I can keep on prayer, but the reality has been really harsh to me. God know how much I gain more weight that day. 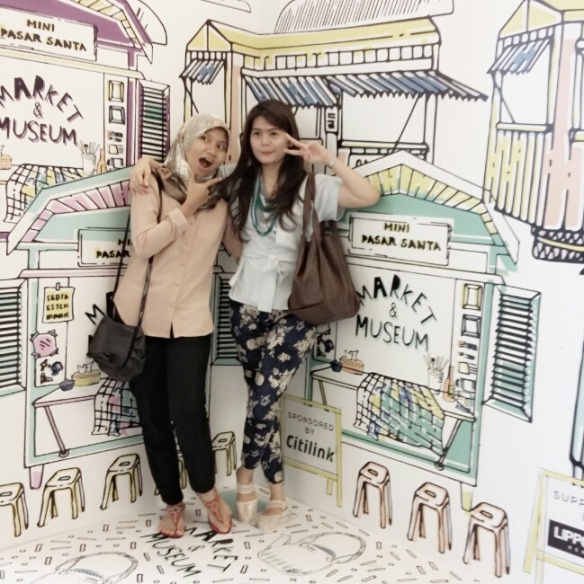 So, we started by taking our picture * off course we are. The social media are waiting for our upload. hehehe * Pose here and there. And then off we go.. to Discovering food * this is my former little student slogan every time she want to tried eating new food or drinks during Snack Time * 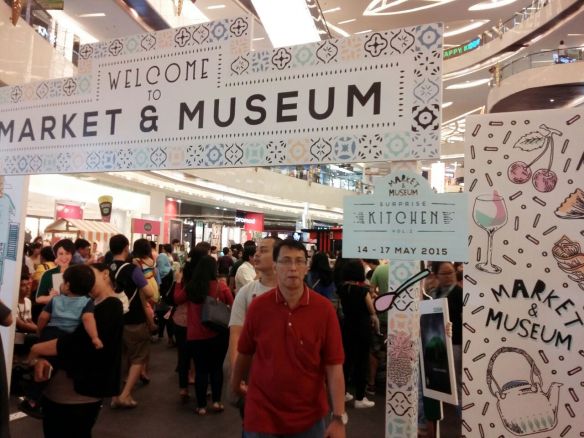 And the journey of discovering food begun. The crowd is amazing. They all craving for food and drinks * we are included *

We made a round trip first and marks which one we’re gonna try. We were like, “Aah that is so cute. Aah this one looks yummy. I want that one. This one too. How about that one over there? Let’s see that. Here, here too. Ooowhh Me, want it want it. Definitely going to buy that.” By the time we finished our trip, we can not decided which one we are going to buy first * hahaha *. So, we went outside to see what’s on the food truck. Although it is really not helping since they all sell food too * another hahaha, poor us *

Finally we decided to taste the sweet ice cream roll from zibbibo. The making process and the outlook of the end product really catch our eyes. Mine was vanilla ice cream with strawberry and peach while Dta’s was chocolate ice cream with ovomaltine. Yummy to the bone. Ice cream is always the best! 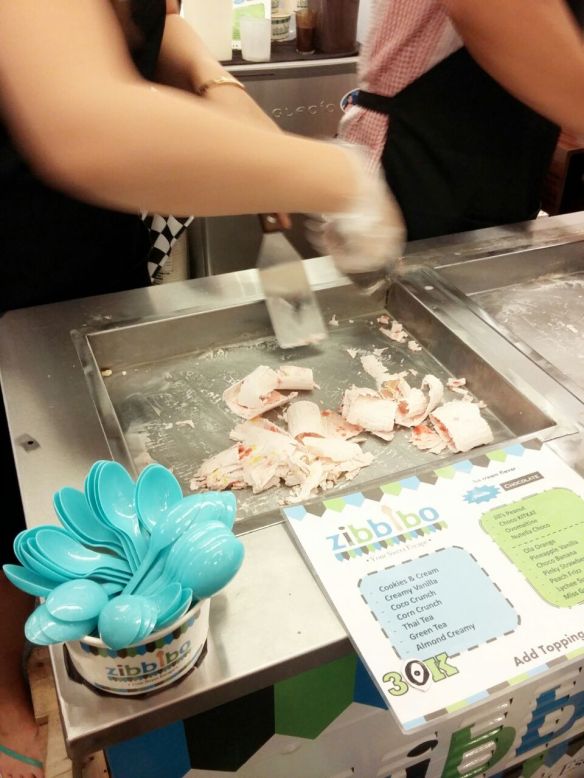 Next, we grabbed some soft, sweet, and luscious pannacotta from the jeyoux bakes.

Healthy plant based milk, the almond milk from au lait.

Lidi with double spicy and cheese flavor from lidi geli.

V-cone shape with vanilla and chocolate ice cream filling from the one and only seoul cane ice cream from yi.kon.

Mie yamin fresh from Baim Wong * he, himself, literally serve us with the yamin * mie & you. And there Dta, standing next to Pevita Pearce with Baim Wong serve the Yamin for both of them * wow, what a sight. Dta is as pretty as Pevita, if you ask me *

End it with kebab from the kebab wagen food truck. Yumm…

And the journey end…

We leaved with happy tummy. Thank you Market Museum for hosting such an event. Will be waiting for your next event.

Just a little throwback. Since I love some challenge. I was kind of excited when a friend asked me to join this highscope fun run.

At first, I was think, 5k? hm… could I get through the finish line. Well, I’m not as strong as I was. But hey, what is to be afraid of. Even my doctor told me to do some sports at least thrice a week, which I rarely done it.

Here is the route.

So, there we were, planned to run along the way. I convinced my cousin, Dhila, to join me.

Finally, we did it! yeay!

And here she was, catches her breath after struggled for almost an hour. Well, at least she can smile now.

After we arrive there, my eyes were spoiled with all te beautiful and artistic craft. Started with batik, tenun ikat, chopper, painting, accessories, jewelry etc. Ahhh… how I love Indonesia with all its culture and craft.

A beautiful handmade craft made of chopper

Clutch made of tenun ikat and crocodile leather. One piece for one design. How exclusive it is.

Would love to all this art

It is very colorful and soul free.

Javanese Bride made of ceramics. Cute as a pie.

Finally, me and my mom could join this event, since we are anleners. We couldn’t make it last year, so my mom curiously always waiting for this year event. 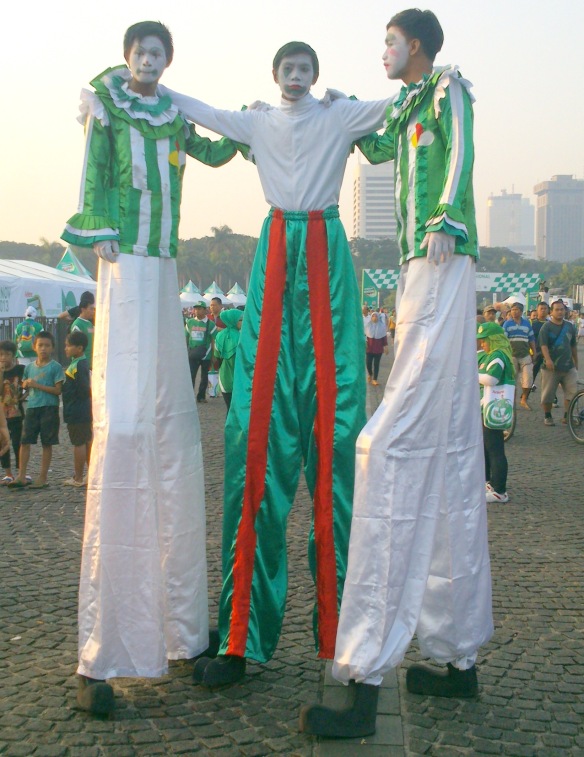 For your info, the guest star is Yovie n Nuno and RAN. Personally, I was really waiting for RAN. They are such a talented musician. In fact, listening them live is way better than the record in CD, DVD, or TV. That showed how good they are.

Bye anlene…. thank you for making this event. See you next year, hopefully.

One thing for sure, my prayer for that day was “God, please, don’t let me be greedy today.” 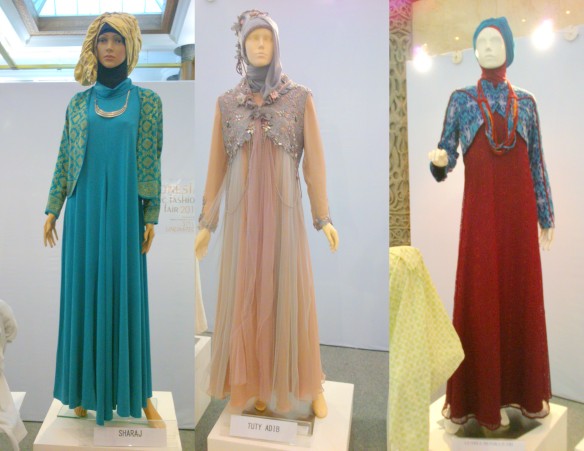 Bergegaslah saya mengajak partner in crime saya alias my mom, menyambangi pameran tersebut. And what a surprise! Sesampainya di sana, my eyes were spoiled with sooo many beautiful things. And it’s all made in Indonesia. How proud I am to be Indonesian. This exhibition is really worth it. 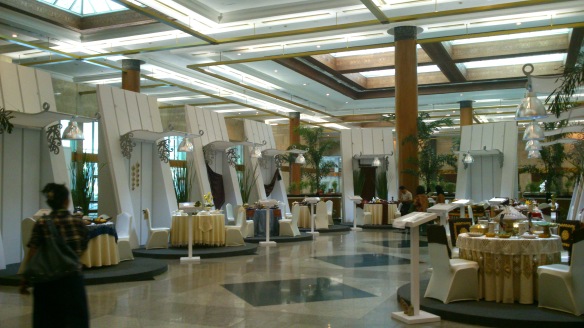 Pertama kali saya dimanjakan dengan penataan meja untuk jamuan makan dari beberapa daerah di Indonesia. And, damn, I just know it. Each province had their own table arrangement for special occasion. Can you imagine how many there are, since we have lots of provinces. Dan pastinya tidak kalah dengan penataan meja makan ala western.  Just look at these pictures. 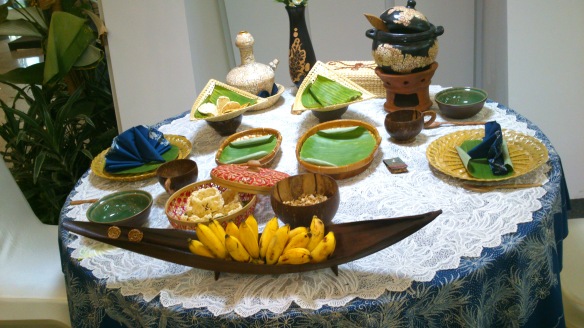 Tata saji dari daerah Papua. Can’t you believe that the dark brown one is served as a plate. 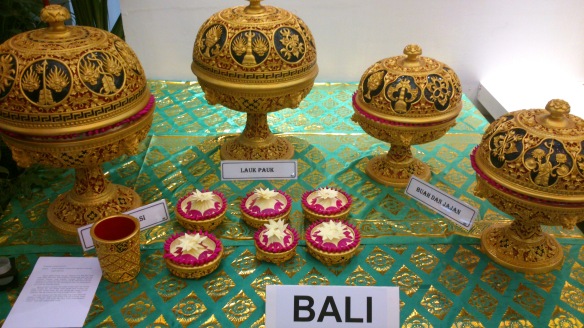 It is from Bali. 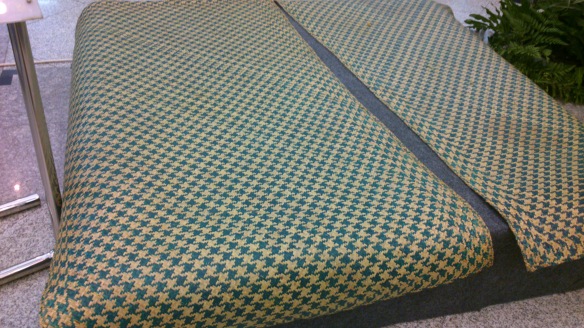 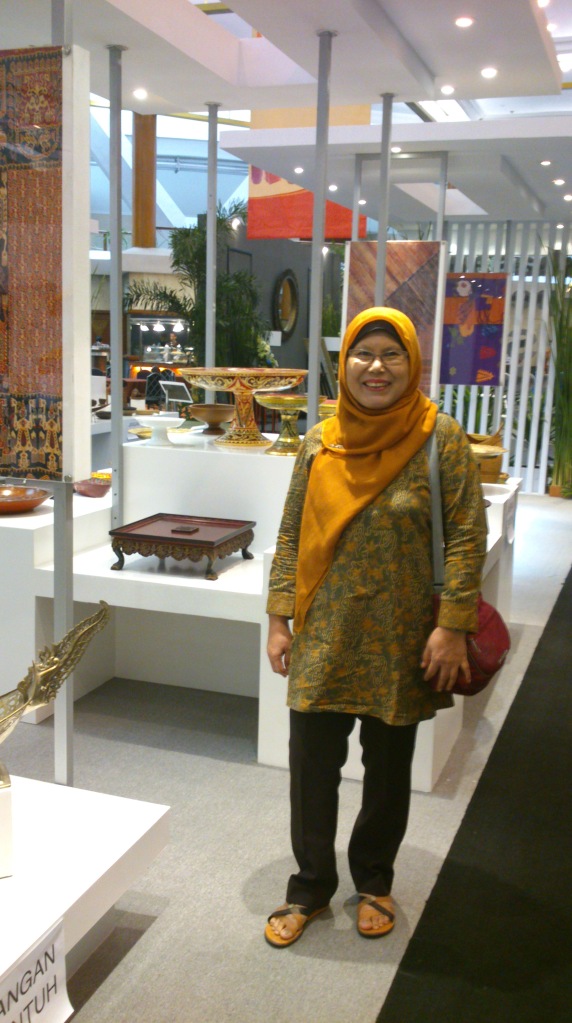 Look at her, she is soo happy. 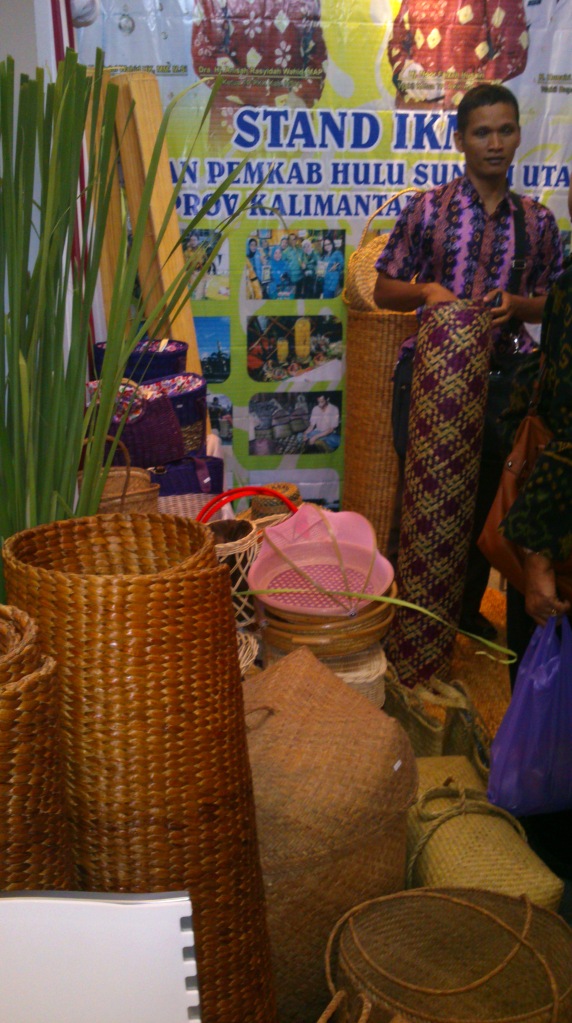 Rattan and bamboo made. Okay, this one is definitely in my shopping list, 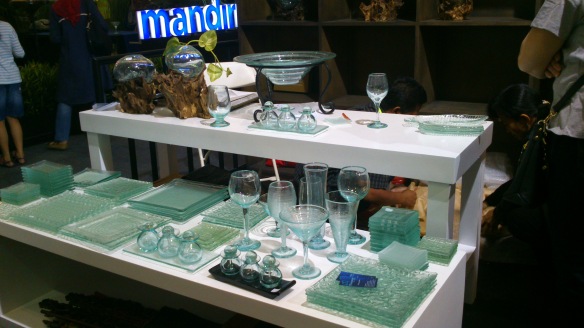 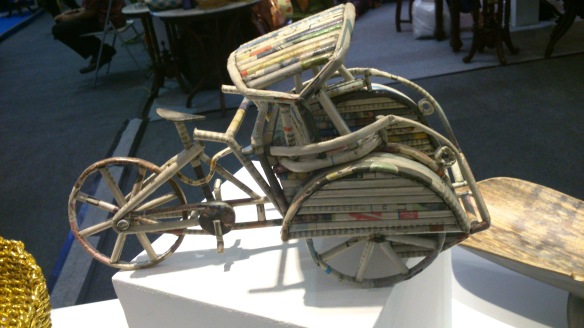 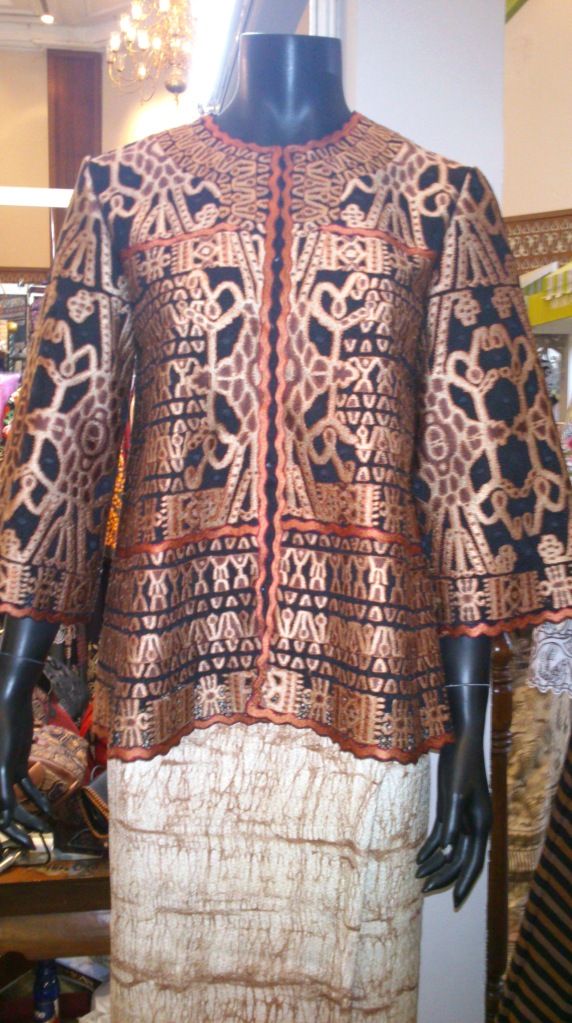 Now I really wanted to share about a very precious moment from last week. Why I said precious, because I did something that I would not dare to do it, not even dare to think about it before.

Which is, to be bald.

I mean, as a woman, hair is like a crown, right? Couldn’t imagine how I looks like without it. And it all change because of charity event called SHAVE FOR HOPE.

Suddenly, courage rushed all over me. I decided to be bald. Not because of fashion, but because of a reason. And the reason is, I want to be part of people who support children with cancer.

I mean, if you want to be bald, then bald for a reason. And how is being bald, had anything to do with it? Well, it did. For each bald, money will be donated straight to YPKAI who will use the money to help children with cancer in Indonesia. So, I just went straight to Shave for Hope website and register myself.

Shave for Hope is the first and biggest charity event done through hair-shaving act in Indonesia. Everyone who participated has one exact purpose, to help and support childhood cancer. It is hoped that this event will raise both people’s awareness as well as highly valued funds.

The idea of Shave for Hope comes from the fact that the incidence rate of childhood cancer in Indonesia keeps increasing, where at the same time the awareness of people towards cancer keeps on decreasing. Statistics show that every year, more than 4100 new cases of childhood cancer arise (credit: shave for hope website)

How wonderful isn’t it. The fact that we could do something to our society, to the children, who will became our future. Furthermore, in an easy way. Some people might think it is just a small contribution.

For me, I really have to say thank you to Shave for Hope, and to all beloved children who fight against cancer. Because all of you, give me the courage to be bald. Just to remind myself that kids should be smiling not fighting cancer.

And that being bald, especially because of the treatment for cancer is something that should not be scared of or embarassed about.

Being bald, doesn’t mean that you are ugly or different from others.

Being bald, means that you are brave enough, more than the others.

Just look at us! We are proud to be bald, and we are still as pretty and handsome as we are before. And for your info, there are people that became even more pretty and more handsome with their bald head.

So, I join Shave for hope in Jakarta, Gandaria City to be exact. I came at noon with my mother which turns out to be interested being a shavee and register herself on the spot.

We wait almost for one hour until our turn while listening to Delon singing and also the Nelwans. Then when it was our turn, we still have to line up. And it was a really really really long line for sure. 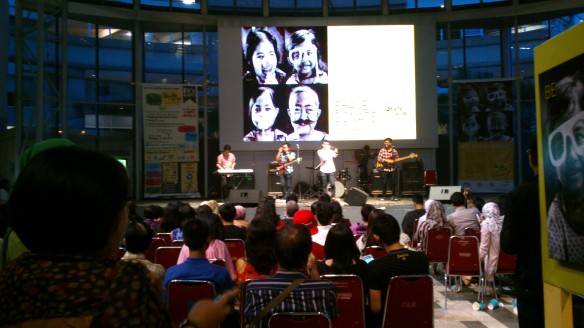 Here are what we do since arrived on the spot and finish it all almost at 9 pm.

Lining up to take “before shavee” pic.

Somehow, me and mom felt relieve and so happy that we did it. Not even a shred feeling of regret.

Well, actually we did regret. That we did not encourage other family members to join us. But hey, we still have next year. I definitely will do it again. 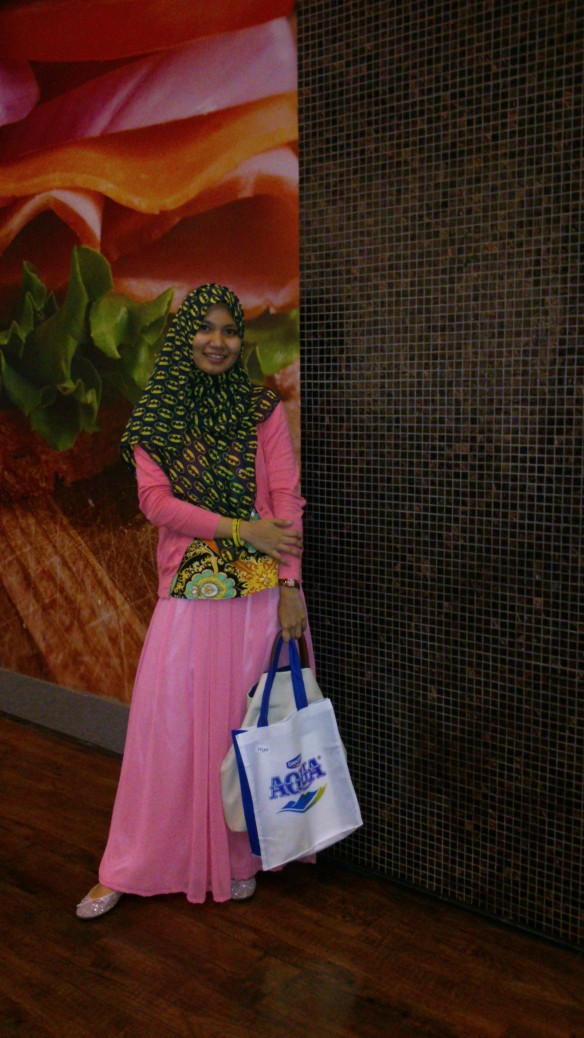 While on the way home, heal the world sung by Michael Jackson started to play in my handphone playlist.

This work is licensed under a Creative Commons Attribution-NonCommercial-NoDerivs 3.0 Unported License.

Hi, thank you for your time wandering around my blog. The one who maintain this blog is an old lady named Melly. A happily preschool teacher who likes to see beauty in everything. A transient wanderer, proud bookworm, anime freak, music listener, fashion lover, curious eater, easy sleeper, Juventini forever and lifelong learner. A blogger who still has a long way to called oneself as a writer. I hope you get a little bit of AHA moment while reading one of my random post. 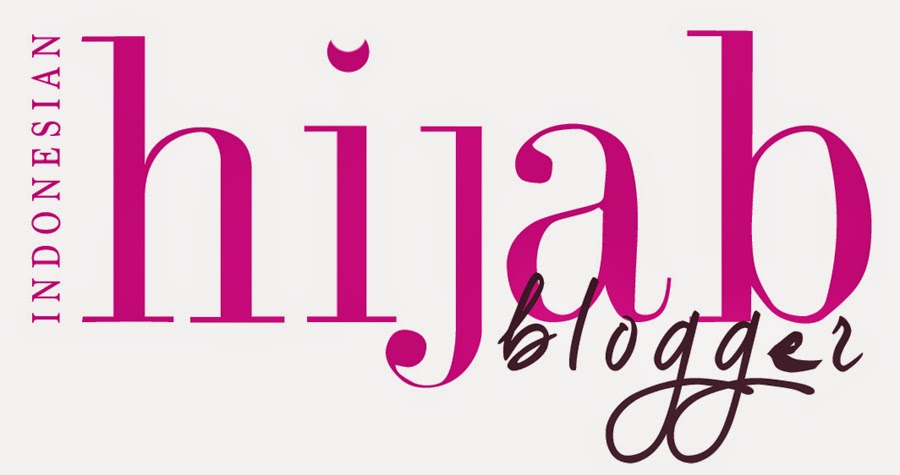 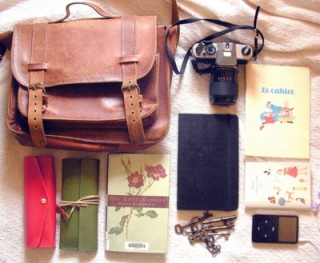